845-658-9900
The Snyder Estate is closed for the winter! After the mine freezes, the site is closed until the spring thaw.

Century House presents an outdoor sculpture exhibition on the grounds of the Snyder Estate. Curated by Jeffrey Benjamin, a participant in last year’s EXCAVATE show, this year, we will are featuring these artists.
There will be performances scheduled on opening day, Sunday, June 25, 1-4pm  and on closing day, Saturday, September 16, 1-4pm.

Curator Jeff Benjamin is an artist and archaeologist living in the Catskill
mountains. He received a masters degree in Industrial Archaeology from
Michigan Technological University, and is currently a PhD candidate in
Archaeology at Columbia University. He has been on the board of the
Century House Historical Society since December 2016. 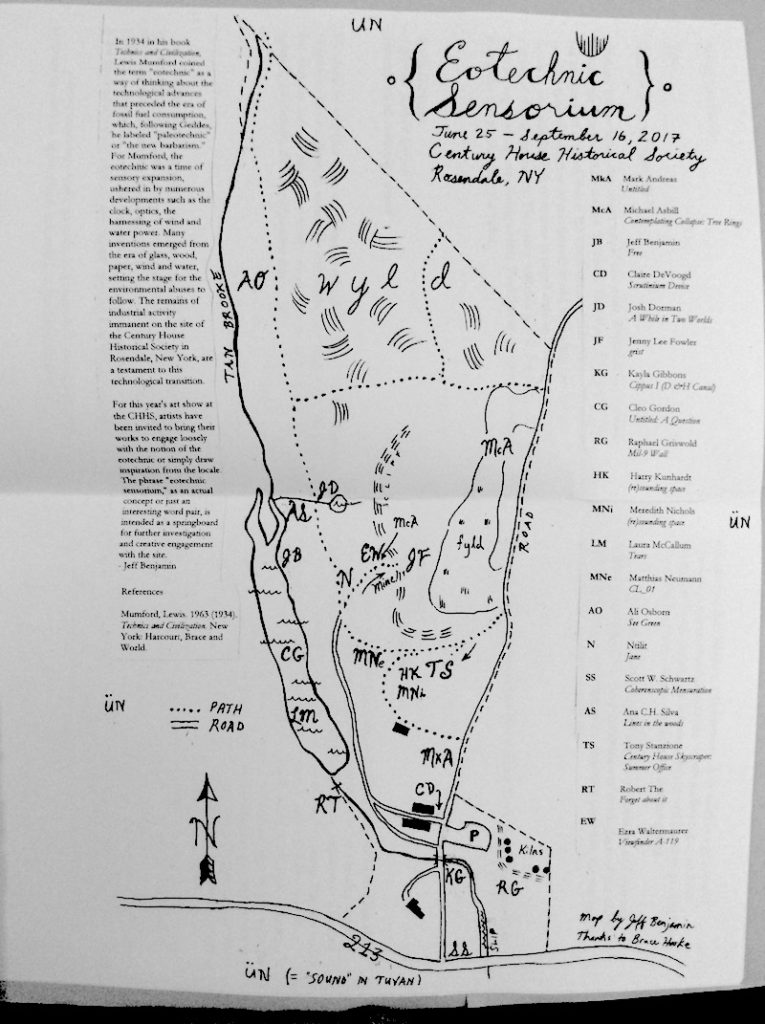 Artists participating in the exhibition are:

In 1934 in his book Technics and Civilization, Lewis Mumford coined the term “eotechnic” as a way of thinking about the technological advances that preceded the era of fossil fuel consumption, which, following Geddes, he labeled “paleotechnic” or “the new barbarism.” For Mumford, the eotechnic was a time of sensory expansion, ushered in by numerous developments such as the clock, optics, the harnessing of wind and water power. Many inventions emerged from the era of glass, wood, paper, wind and water, setting the stage for the environmental abuses to follow. The remains of industrial activity immanent on the site of the Century House Historical Society in Rosendale, New York, are a testament to this technological transition.

For this year’s art show at the CHHS, artists have been invited to bring their works to engage loosely with the notion of the eotechnic or simply draw inspiration from the locale. The phrase “eotechnic sensorium,” as an actual concept or just an interesting word pair, is intended as a springboard for further investigation and creative engagement with the site.